“People want to talk about what happened; they just don’t always know how.” – Lisa Langford

“OBJECTIVELY / REASONABLE: A Community Response to the Shooting of Tamir Rice, 11/22/14” is a new, collaborative piece that will be presented at the Creative Space at Waterloo Arts, August 18 – September 4, 2016.

What is it? “Objectively / Reasonable” is “a documentary play on the impact and aftermath of the Tamir Rice shooting, expressing unheard voices from the Cudell neighborhood and Greater Cleveland. This new work lets the people speak, with their fears, reservations, and hopes fueling monologues drawn from original interviews. Created by an ensemble of playwrights, “Objectively / Reasonable” features direction by Terrence Spivey, former artistic director of Karamu House.”

Taking place within the collage of original monologues, the piece is based on interviews with legal experts, social critics, and everyday people. It’s presented by the Cleveland Playwrights Local.

Several playwrights are contributing to this project, including Mike Geither, Tom Hayes, Lisa Langford, Michael Oatman, and David Todd. Direction is by Terrence Spivey, well-known to Cleveland audiences from his tenure as artistic director of Karamu House.

Todd, the artistic director of Playwrights Local, conceived and arranged this venture.

“We wanted to address this issue in a way that felt appropriate and respectful,” Todd said. “We tried to represent the perspectives of people who were still struggling with this case and with the issues underlying it.” 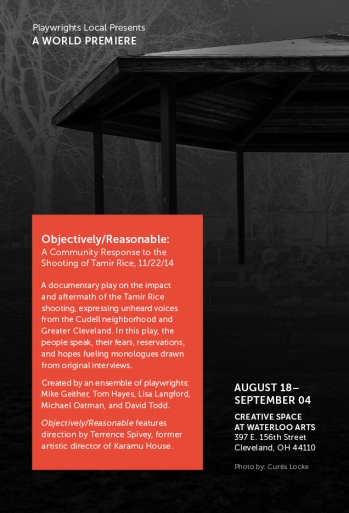 He answered some questions for me about the project.

Kate Klotzbach: How did this piece come together? How did all of those involved begin collaboration?

David Todd: Our company, Playwrights Local, was interested in creating some ensemble-written plays and also some plays that reflected life in Cleveland. With that in mind, we started thinking about topics, and the Tamir Rice shooting came up quickly. There was obviously a lot of reaction in the city in the form of protest and media coverage, but we felt there still was a void in the arts. All of the playwrights we contacted were immediately interested in working on this.

We began the collaboration with some meetings in which we discussed the form the play would take and what kinds of interviewees we’d be seeking. We talked about the core issues as well as related ideas and themes—and that’s pretty much how the play itself went, where you have some focus on the shooting and the immediate frame of reference and some focus on the bigger picture. We approached the play as a collaboration, but we also embraced the idea of having five different playwrights pursue even more points of view through their respective contributions. We knew this was a complex situation with a lot of angles and we wanted the design of the play to accommodate that.

KK: How did you choose the monologue format for the play? What kind of research went into writing?

DT: This is what you’d call a documentary play or work of verbatim theater. There are a lot of different approaches within that genre, so there was some thought put into what form would best suit our purposes. For us, the idea of a “community response” was helpful in terms of clarifying things. We didn’t want a bio-play, and we didn’t want a procedural-style courtroom drama. We wanted to give people a chance to talk, especially people who hadn’t been heard from. Given all of that, the monologue form seemed like the best option.

We created a master list of interviewees and made an effort to keep an eye on what everyone was doing. We also shared our research materials and discussed things internally, of course. However, when it came to the interviews themselves, those were done in a fairly natural manner.

KK: Have you and the collaborators directly involved the Rice Family? How so, or why not?

DT: Initially, we wanted to maintain a respectful distance from the Rice family, since we assumed they were getting a lot of requests for things and we didn’t want to appear too opportunistic. We had a contact who was close with them and we tried to inform them of our plans to do this play and leave any further involvement up to them. As the process unfolded, we did end up speaking with a member of the immediately family, and that was very fulfilling because in addition to providing an essential point of view in the play itself, it also helped us give them a better understanding of our intentions.

KK: How has working on this affected you personally? How has it strengthened or shifted your views on both the Rice case, and on police/racial/community relationships as a whole?

DT: One of the things that affected me during this process was the depth of feeling people had. The people I talked to had very strong reactions, and not necessarily in an inflammatory sense, but in the sense that they were often deeply frustrated for one set of reasons or another. But within that, people focused on a lot of different facets of the Tamir Rice case, and they didn’t always see the same things as pivotal. For instance, I really saw the power a video can have given how many people knew that video and had their opinions affected by it. And I think I also saw that not everyone had the same knowledge of things like the grand jury case or the county prosecutor’s report, which was probably harder to access.

To switch the subject a little, I think the value of a play like this is that it can capture a lot of these different shards of thinking and give you a sense of how they fit together. You can also get an idea of how quickly people’s thoughts move from emotional responses to logical arguments, and see how complicated the subject is on that level as well. Working on this play changed my notion of how other people were thinking about this subject and about policing and justice and life in the city of Cleveland in general. I’d go into the interviews with a list of questions, but most of the time people just had things ready to say, and they’d jump right into them at the beginning.

“Objectively / Reasonable” runs August 18 through September 4, with shows Thursday through Saturday at 7:30 pm & Sunday at 2:30 pm. All performances are at the Creative Space at Waterloo Arts (397 E. 156th Street, Cleveland, OH 44110). Tickets are $15 for adults, $12 for seniors, and $10 for students. Group packages are available. For more information, visit the company’s website at http://playwrightslocal.org.

Playwrights Local is a theater company based in Cleveland. Billed as a playwrights’ center, the organization’s goal is to provide a home for dramatic writing in Northeast Ohio. They offer classes and workshops, produce original plays, provide professional development opportunities, and engage the community through site-specific projects. Tax-deductible contributions to this 501(c)(3) group can be made at http://playwrightslocal.org/donate.