My fellow Americans: I urge you to join the only political party worth joining in this 2016 Presidential race: the party of “44 Plays for 44 Presidents,” now playing through October 29, 2016 at the James Levin Theatre on the Cleveland Public Theatre (CPT) campus.

It’s the party of our presidential history told in an irreverent, yet still thought-provoking and fascinatingly funny series of montages.

This production is co-directed by Dan Kilbane & Caitlin Lewins, and features (for the first time) an all-female cast. These lively, brave women dig in deep, which is amazing for the limited span of time given to each president. And what a ride!

CPT summarizes the show as such: “7 women take on each of the 44 POTUSes, singing, dancing, declaiming, laughing, eating, expounding, carousing, jumping, falling, running and many, many other -ings.”

What is “presidential”? A posture? A vocal pattern? A manner of speech? A way of dress? A network of social connections? An aura? A myth? An office? A title? A deed? A term in office? A series of actions? A number of declarations?

The play explores these things, and how each president is remembered by history. The play also asks – is this the whole story? Is this the real story?

With a “presidential” coat to tie the scenes together, and a “DIRECT QUOTE” sign to let the audience know when the actors are speaking actual presidential quotes, the show moves with a fast and furious pace.

“44 Plays for 44 Presidents” gives many genres of “representation” for our illustrious heads of state. From the “biblical” creation of the United States where George Washington saw that it was good, all the way to the current election cycle, there are boxing matches, heehaw songs, a giant baby, the murder of balloons, and a game of dominoes.

But please understand that amidst the revelry and high energy sarcasm, there are indeed deep moments of thoughtful contemplation.

Presidents Andrew Johnson and Lyndon B. Johnson have montages that utilize projections and shadow, and actor Molly Andrews-Hinders sends chills with her monologues about half-waking from a nightmare. The feeling of dread in these moments is palpable and ominous.

President Franklin D. Roosevelt is a longer montage in candle light and with projections, celebrating his accomplishments.

President John F. Kennedy is a quiet montage of images of the leader and his family through the presidency and his assassination, narrated by old radio and television broadcast audio. It is reverent and respectful.

And then all of that is balanced by games of double-dutch, chants of “We love Dick!” and 80’s music. It’s a roller coaster of emotions.

The play has a lot of canned and live music, and the women have great voices, and beautiful harmonies. Many of them play live instruments, and the set is multi-functional with 4 pillars and lots of movable pieces.

Join Molly, Melissa, Sally, Chennelle, Tanera, Colleen and Carrie as they give life to one of the globe’s most powerful people. They are ready to take you on a journey exploring “227 years of American history in just under 120 minutes with over 160 characters.”

Performances are Thu/Fri/Sat/Mon, in CPT’s newly renovated James Levin Theatre. All Mon/Thu $12. Fri/Sat $30. Students and seniors get $3 off (Fri/Sat only).

Guarantee a seat for you (or your group) at one of our premium cabaret tables for just $5 more. Seats are in limited supply, reserve your cabaret seat at checkout.

The James Levin Theatre features a fully ADA-accessible via our newly-installed patron elevator and the addition of a gender-neutral, wheelchair-accessible restroom.

FREE BEER FRIDAY is every Friday at CPT. Audience members are invited to engage with artists and fellow audience members after the show and enjoy a drink (or two) on CPT! 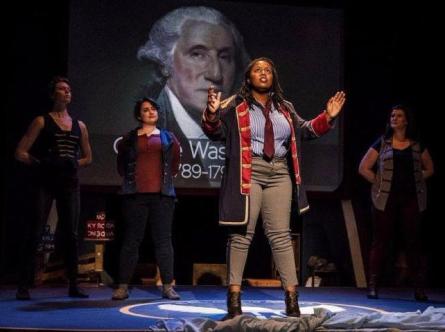 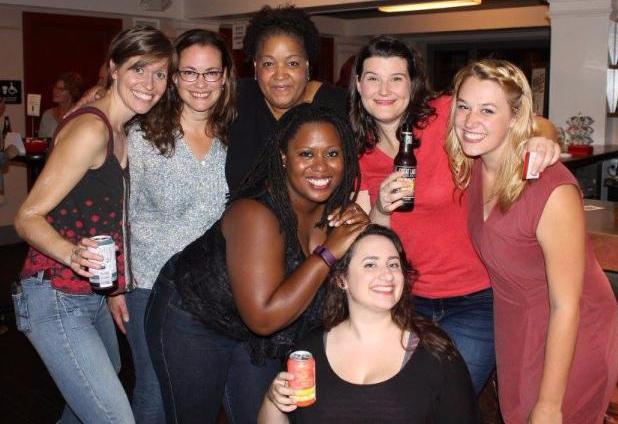