Cleveland State University’s Department of Theatre and Dance, a Resident Company of Playhouse Square, starts out the 2016-2017 Theatre season with Tony Award “Triple Crown” winner Avenue Q, running October 27 – November 6 in the Allen Theatre. This means you only have ONE MORE WEEKEND to join the block party! 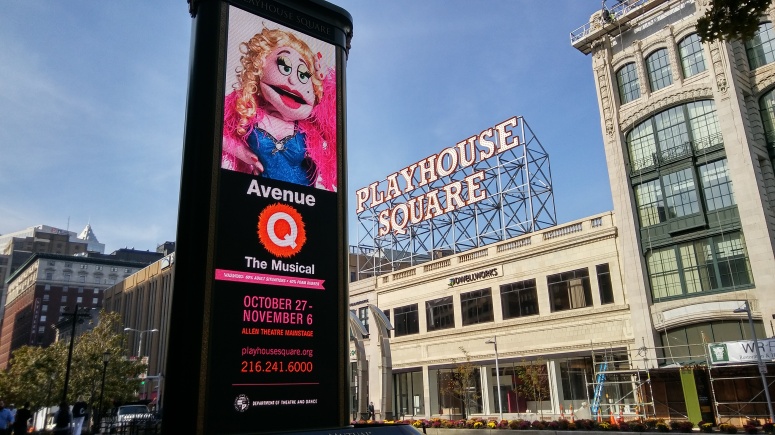 The Story
The laugh-out-loud musical tells the story of a recent college grad named Princeton who moves into a shabby New York apartment all the way out on Avenue Q. He soon discovers that although the residents seem nice, it’s clear that this is not your ordinary neighborhood. Together, Princeton and his new-found friends struggle to find jobs, dates, and their ever-elusive purpose in life.

Winner of the Tony Award for Best Musical, Best Score and Best Book, Avenue Q is part flesh, part felt, and packed with heart. Filled with gut-busting humor and a delightfully catchy score, Avenue Q is a truly unique show that has quickly become a favorite for audiences everywhere. The zany, irreverent musical is directed by CSU Associate Professor Russ Borski, and music directed by Maria DiDonato. It was conceived by Robert Lopez and Jeff Marx, who together wrote the music and lyrics, with book by Jeff Whitty. Warning: mature themes explored through poly-foam puppetry!

General Ticketing
Most regular shows run Thursdays through Saturdays at 7:30 p.m., as well as Saturdays and Sundays at 2 p.m. $10 General Admission Tickets are available by calling 216.241.6000, visiting playhousesquare.org, or buying at the State Theatre Ticket Office, located at 1519 Euclid Avenue, Cleveland, OH 44115. Tickets are also available 60-minutes prior to performances at the Allen Theatre Complex. CSU Students, Faculty and Staff can purchase one $5.00 ticket per Valid CSU ID presented at time of in person purchase.

About Cleveland State University
Founded in 1964, Cleveland State University is a public research institution that provides a dynamic setting for Engaged Learning. With an enrollment of more than 17,000 students, nine colleges and more than 200 academic programs, CSU was again chosen for 2015 as one of America’s best colleges by U.S. News & World Report. Find more information at www.csuohio.edu, on Facebook and by following @CLE_state on Twitter.