The world’s most fantastic green, fuzzy buzzkill has taken over the Connor Palace stage at Playhouse Square, as Dr. Seuss’ How The Grinch Stole Christmas! The Musical continues its run through December 11, 2016.

Based on the much-loved animated television classic Dr. Seuss’ How The Grinch Stole Christmas!, the stage musical features all of the adored characters that 50 years of fans have come to love. With music and book by Mel Marvin and Timothy Mason, the story features the Whos of Whoville, the Grinch, plus an Old version and a Young version of the dog Max.

Narrated in retrospect by Old Max, the tale tells us about the merry Whos who love Christmas. They plan and they shop and they celebrate with their whole beings. They enjoy every moment of the holiday.

However, Mr. Grinch (who lives up on the hill) hates Christmas with the passion of a hundred thousand broken Christmas lights. He hates the songs, he hates the feast, he hates the presents, and he hates the roast beast. Some say it’s because his heart is “two sizes too small.”

Unfortunately, his dog, Young Max, has to endure the brunt of the Grinch’s rantings. Max’s story is as sad as it is hopeful, and Young Max makes the most of his life with the grumpy wonder. Much to his dismay, Max soon finds out that the Grinch has a plan to kill the joy in Whoville – he plans to STEAL Christmas! But life below in Whoville goes on as if nothing is wrong. How does the story go from here? That’s up to you to see!

The visuals are a swirl of colorful Seuss –
Greens for the Grinch, reds and whites for the Whos.
Pretty patterns of twirly colors float along with the lights,
as costumes take strange shapes and sets reach high heights.
The stage is awash with pictorial candy,
and the magical frost on the stage comes in handy.
OK my poor attempt at rhyming is finished,
otherwise my point here might be diminished.

Although filled with mostly new and interesting music, the show contains many familiar tunes from the television special such as “You’re A Mean One, Mr. Grinch” and “Welcome Christmas.” Fah who for-aze! Dah who dor-aze! Welcome Christmas, Come this way!

The team of Bob Lauder as Old Max and Andreas Wyder as Young Max is endearing and enthralling. They work wonderfully in tandem and both do a great job of encapsulating the energy and mannerisms of a friendly dog.

Cindy Lou Who (played alternately by Danielle Guilbot and Julia DiPiazza) is featured prominently in the show. The character is adorable, sweet and heart-melting. 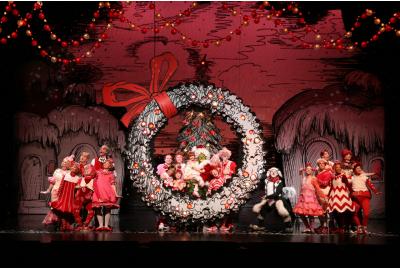 The title character of the Grinch is played by a phenomenal Philip Bryan. He is swank and slimy in the most brilliant and bold way possible. With shades of Beetlejuice and the magnetism of a furry holiday Boy Band (but green and solo), Bryan is a fantastic spectacle of a choice for this huge and grinchy role.